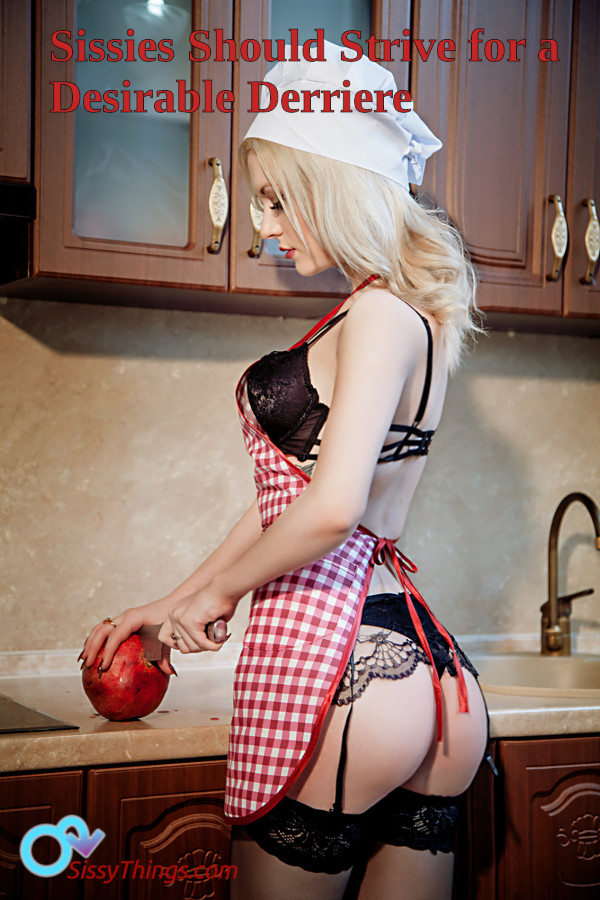 What serious sissy wouldn’t aspire to have a bubble butt like the one pictured above? Unfortunately, depending on the current state of your posterior, it ain’t always so easy to acquire such an impressive asset.

Compounding the challenge is that much of the recommended butt-popping articles and videos floating about the internet don’t necessarily give us sissies ass-shaping advice that works. Let me give you my own real-life example.

I was blessed at birth with a fairly nice butt. Lots of running during my younger years served to keep it that way. But over time I began to notice it begin to morph into something resembling a warmed-up marshmallow. As I became more serious with my sissification endeavors, I decided to do something about my sagging situation.

I began to do 50 squats pretty much every morning… for three goddamn years! I was dismayed to find that there was nothing much happening back there. So I switched-up to doing daily reverse lunges; for another two years. Still, little if any progress.

I eventually figured out two important things when it comes to shaping-up your ass:

Performing squats and lunges using only your bodyweight might be great for keeping your legs toned-up but they won’t do squat for revitalizing your not-so-sweet looking ass. The above two insights can be re-stated more directly:

Following are 6 sissy butt exercises that will transform your ass into one irresistible bubble-like booty.

If you’re looking for some extra help with packing your butt with muscle, then Unlock Your Glutes, is a solid program which I believe is the bomb of booty building. 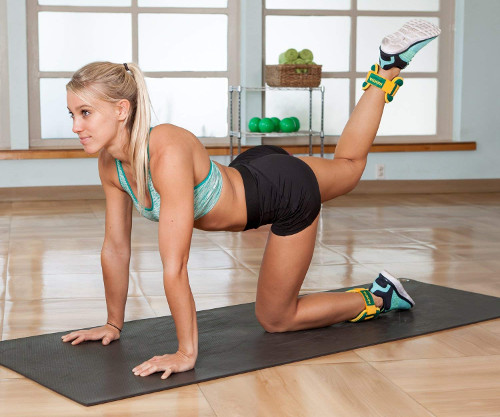 Notice that the girl in the photo above is using ankle weights to provide resistance. I found two 10 pound ankle weights at Walmart for $30. That should be plenty of weight for you to start off with. The only time that you should be doing any of these exercises without added resistance is when:

Other than that, if you can do more than 10-15 ‘reps’ then it’s time to add more resistance. A higher number of repetitions will not inspire the glute muscles to grow bigger in the fastest way possible. Remember, we’re after a big, bad-ass booty.

The donkey kick, like the straight leg kickback (2nd glute exercise below), are both hip extension exercises that have one thing in common; they extend the hip joint using the glutes to move the leg rearward. Proper form is critical. You should also keep the reps between 10-15. Three sets of these repetitions, three times per week is a good guidline if you want to see significant results.

Here is a video that demonstrates the donkey kick, the straight leg kickback and the fire hydrant, along with some other variations.

The fire hydrants should really be treated as their own exercise anyway since they target a different set of muscles within the glutes. 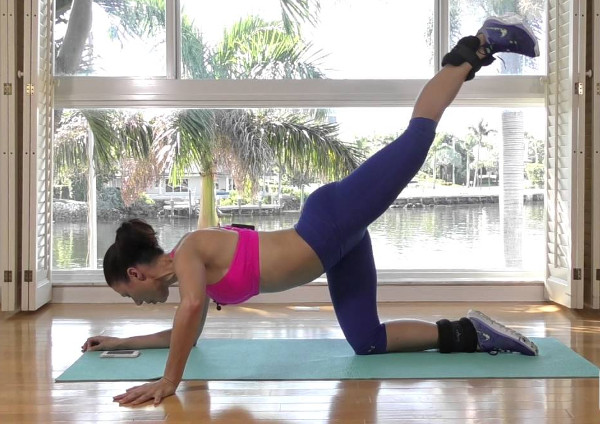 If you haven’t already done so, watch the video above to see the straight leg kickback in action. You can also do these standing up with ankle weights or you could use an ankle cuff attached via a cable to a weight stack. A resistance band can be substituted for the weights.

I like to do these kneeling down as it’s nice to have gravity working in addition to the ankle weights. Having the leg extended straight out maximizes the leverage of the ankle weight. I also prefer to put my forearms on the ground while doing these (as well as the donkey kicks). 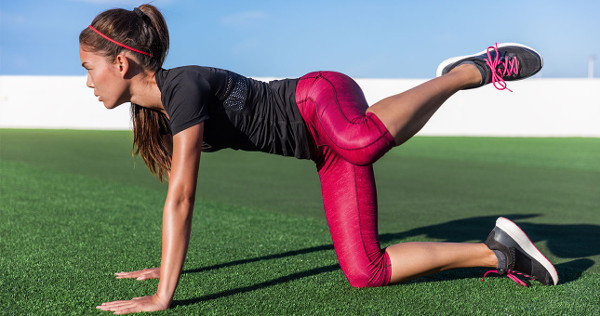 Not only do you want your sissy butt sticking out, you also need to make it wider too. To accomplish this you facillitate growth of both the gluteus medius and minimus muscles by performing an abduction movement (away from the body) of the upper leg.

Notice that the girl above isn’t using any resistance, which is a big no-no. Since you already have your ankle weights on after perfoming donkey kicks and straight leg kickbacks, it makes sense to do your sets of fire hydrants next.

Remember, the 2nd exercise in the video above also adequately demonstrates the fire hydrant; so go back and watch that again if necessary.

As always, proper form is crucial. With the fire hydrant, like the previous exercises, it’s always important to incorporate an interval or rest period (60 to 90 seconds) between each set. With one-legged exercises, the interval is automatically accounted for since one leg is resting while the other is working. 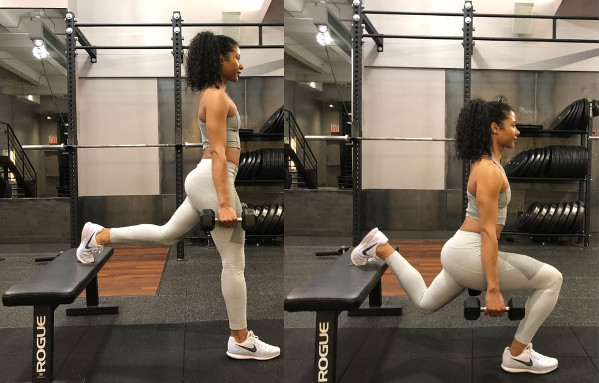 I know, I know… typical squats don’t isolate the glutes like we want but these bulgarian split squats are a different animal. The key to this exercise is to place the front leg out from the bench far enough so that the knee is over the foot. This will result in emphasizing the glutes while de-emphasizing the quads. Other things to take note of:

This is a video that shows you exactly how to do these split squats:

Please be warned sweetie, although these are awesome sissy butt exercises, they’re definitely not for ‘sissies’.

So what’s wrong with lady above? She’s not only gorgeous but her form while doing a glute bridge is impeccable. But of course there is no resistance, she’s merely pushing air. That’s NOT going to cut it for you princess.

Glute bridges can be super effective in targeting the butt muscles… if you perform them with some resistance. Any form of resistance will do. A barbell, dumbell or even a sandbag will work.

Me, I started off using my ankle weights opened up and laid across my midsection – 20 lbs, along with a 15 pound dumbell for 35 lbs total. Eventually you’ll find it much more efficient when you graduate to a barbell.

The idea while doing a proper glute bride is to pause briefly at the top while attempting to squeeze your ass up so that it is almost ‘kissing’ your belly button.

Here’s a video that shows how to do a glute bridge using a dumbell:

Okay, are you ready to get really serious in your quest for developing an ass-to-die-for? 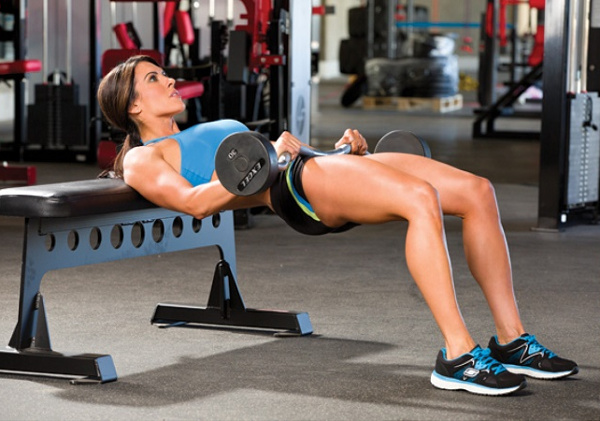 Am I to mean that the first four sissy butt exercises in this article aren’t serious? Not at all! But when legitimate bodybuilder types (that’s not you sissy) want to seriously grow their glutes bigger, then the hip thrust is their go-to exercise.

The hip thrust is basically the big sister to the glute bridge. The main difference is that you place your shoulder blades and upper back on a raised bench while incorporating a heavier load, namely a barbell. Take a look see:

By raising your upper body off the floor you gain a wider range of motion. Adding a heavier resistance via a barbell will get you a bigger and rounder sissy butt… faster!

Keep in mind the barbell hip thrust is an advanced exercise so it’s perfectly okay to start off using just your body weight. Additionally, you can also wait and incorporate them into your sissy butt exercise program after you’ve mastered the weighted glute bridge.

So sweetie, depending on how far down the sissification path you’ve ventured, I hope it’s apparent that becoming more feminine entails a lot of work. Perfect make-up, strutting confidently about in high heels and keeping your body shaved, soft and smooth takes some serious—and conscientious—effort.

Having a beautifully shaped bubble butt will require the same level of effort. In order to enhance that effort, this program Unlock Your Glutes can do wonders for that booty of yours.

So… I emphatically encourage you to embrace your sissiness by getting off your seriously-cute-to-be-ass and start working on it.

If you’re interested in achieving that coveted—and much admired—hourglass figure, you may want to check out my article: The Sissy Feminizing Workout For an Hourglass Figure.